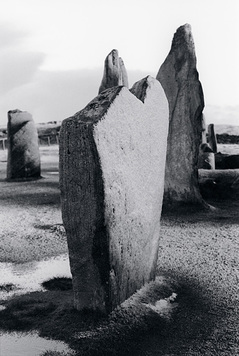 From childhood I had been fascinated by the thought of Stonehenge, Druids and ancient astronomy. So I was very excited when I had the chance to travel to the remote Isles of Scotland, home to some of the most ancient stone monuments in the British Isles. In the numbing cold of a Scottish winter, I watched with fascination as the stones took on many different shapes and forms, before and after being coated with a good dowsing of snow.

What possessed these people to build these huge monuments around 3000-4000 BC making some of them older than the pyramids of Egypt? It also remains a mystery how these stones - some of them weighing over 5 tonnes - were dragged for miles over rough terrain, as the majority did not come from the surrounding areas. Many sites were built to align with sacred seasons in their calendar, or built along sacred ley lines. 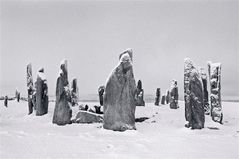 The Callanish Stones in the Isle of Lewis are a Bronze Age monument built approximately 3000 BC to track the movement of the moon and possibly also as a temple and burial complex. With climate change around 1000 BC they were virtually hidden under piles of peat for some years until the locals started gathering peat for their fires and the stones were rediscovered. They are laid out like a distorted Celtic cross with a stone avenue leading up to a circle of stones ranging from 8-12 feet high. Within this circle is a burial chamber or chambered cairn. Attached to this extraordinary monument are some interesting legends. Amongst them the theory that the greatest stones were Druid priests who had been turned to stone by an enchanter. When the stones are covered in snow, this becomes quite believable. 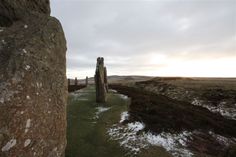 The Ring of Brodgar is situated in the heart of the West Mainland in Orkney. Dating from approximately 2500 BC, this Neolithic stone circle has been situated to have clear views in all directions. The stones range from 2-4.5m high with their flat sides facing the centre of the circle. Nowhere is the feeling of space where water, land and sky all seem to merge, stronger than at Brodgar. The powerful shapes of these stones were enough to frighten off Northern Invaders, while the native Orcadians stood firmly inside the ring refusing to move until their enemies backed off. Little is known about the history of this stone circle which may have been constructed as a burial ground and to view solar alignments relating to solstices and equinoxes.

When I arrived home and looked at the images I had taken, I felt they were worthy of sharing as a unique part of the history of these Isles. The strangely graphic shapes fascinated me and enhanced by the beautiful light in the Scottish winter seemed to hold a deep mystery. I wanted my images to show the extraordinary strength and power these stones possessed. To many of the islanders they are still revered as the sacred memorials of their ancestors.

The black and white images are scans from 35 mm film, which proved to be a useful commodity as my digital camera refused to work once the temperature  dropped below minus 20 degrees Celsius. The colour images are digital.  All images are printed on Hahnemuhle art stock paper. 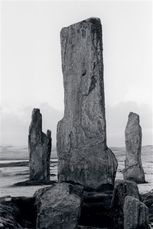 I found my passion for photography when studying Graphic Design at Wellington Polytechnic in the late 60’s, realising that capturing images with a camera was the way I could best express myself.

I established my own photography business 26 years ago, and have had the pleasure of recording many special events in people’s lives. Later in my career I have been privileged to document the land, people and their customs from some remote and unique areas in the world.

My first exhibition was in 1980 at Photo Forum Gallery in Harris St where I had an exhibition experimenting with black and white infra-red film.

In March 2002 I had an exhibition entitled “Images of the Middle East” In Barista Gallery, Brandon Street, recording my time travelling mostly alone, through Egypt, Jordan, Cyprus and Crete. It was at this time I realized that documentary and travel photography was something I really enjoyed.

My most recent exhibition was documenting a spiritual journey with the Q’ero Indian people who live in a small village high up a mountain in Peru. This was held at Photospace Gallery in Wellington in 2006.

It seems fitting to honour my Scottish ancestors with this latest collection of images of the stones that have withstood the passage of time and still stand in all their glory for those who wish to view them today.