Born in Poland, Magdalena is a photographer based in Wellington, New Zealand. Magdalena received an MA in Film and Cultural Studies from the Jagiellonian University, Krakow, Poland in 2009. She also took a short course in photography at the School of Visual Arts in New York in 2009.

Magdalena exhibited in a group show in New York, and had a solo show in Krakow, Poland in 2009. Since moving to New Zealand in 2010, Magdalena has worked as a library assistant at the Alexander Turnbull Library and as a digital photography technician at Archives New Zealand. Magdalena is now focusing on her art photography projects full-time. 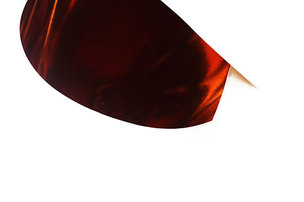 These photographs transform simple materials into abstract forms. The source materials are manipulated to modulate colour and produce elaborations on visual elements. The arcing lines in the images result in both discrete, closed forms, and forms which might extend indefinitely beyond the image edge.

The main set of works presents variations in size and shape; a limited palette moves through subtle variations, using the interplay of natural light with the materials' textures. While these images avoid a fixed meaning, they contain elements which can be interpreted as figurative; within the series there are works showing spatial depth, as well as colour fields which are assertively two-dimensional.

The works have been produced with a combination of spontaneity and control; some show signs of their making, while others elude attempts to understand those processes.