In sea of trees, the Japanese suicide landmark Aokigahara-jukai is perceived as a place of social construction. The forest boundary signifies a contrast between social norms and the everyday, with social marginalisation and the horrific.

In process the work sought a consciously systematic approach, involving photography at set distances apart on two walks, creating photographic paths along a margin of the forest and within it. The tiles of the works include fragments derived from web searches in Japanese, exploiting a somewhat fraught online 'translate' function. This produced text that is removed and partial, with an interest in the circulation and skew of information.

sea of trees was undertaken in response to existing representations of Aokigahara-jukai. These commonly sensationalist depictions have arguably encouraged further suicidal ideation in relation to the site. This body of work explores another kind of photography, forming links between social marginalisation of both the site and the issue of suicide. 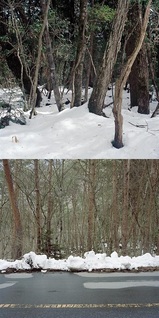 
About
Central to my art practise is ongoing experiments on the representation of place, focusing on dominant land use of chosen sites along with social ideas surrounding places and landmarks. Working with the medium of film photography and a project-based methodology, works are created utilising systems to control how a site is depicted and layering meaning through the systems of depiction. The idea of the journey is important, with projects being produced on-site, with walking and photography on self-imposed trails as crucial acts. These experiential experiments accumulate as works that offer narrow, partial views.