My personal history of coastal living and previous works references to water provides some 'back story' to this exhibition. More recently, my ideas were stimulated by 'Vessels', a kinetic installation of light on water by Daniel K Brown (City & Sea Museum c.2010). I am also interested in applied photography since finding school textbook examples of scientifically recorded phenomena such as the time-based capture of the distance between lightning strikes.

These photo-based works bypassed the camera and involved direct 'drawing with light' during a brief period of darkroom experiment. I generated and developed this imagery using the photogram technique starting with a jam jar and experimenting with water effects. Here, the object is positioned on light sensitive paper, exposed, then chemically processed. During production I explored different light sources, viewpoints and angles of projection along with sequences of a movement narrative.

Keeping with this "low tech" and makeshift approach, I staged light refractions incorporating glass domestic vessels, filled with water, to operate as a lens, prism and condenser. A torches beam was then passed through the vessel at a certain angle to the paper, forming light refractions of various shapes. Essentially, I was distorting the apparatus of the photographic enlarger which involved trial and error plus an element of chance, accident or the unexpected.

The sequence or narrative behind these images evolved intuitively during the process of making the work. The ambiguity of the figurative forms might point to the different stages of an organic, chemical reaction or equally, they could be of animal, human anatomical or biological origin. Gestural movement and ephemeral marks made by the refracted light was for me, similar to my experience of watercolour painting.

At post production stage, the computer has permitted me the freedom of presentation, colour and scale. The "one-off" and perhaps unrepeatable production of the photogram print, was liberated by the commercial C-type photographic process (Lambda print). 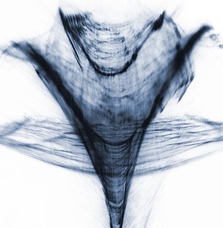